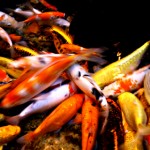 It is not uncommon to have animals symbolize different traits. For example, the ox symbolizes diligence and hard work, the fox symbolizes slyness, the owl is the symbol of wisdom and of course, the lion symbolizes royalty. But what does the koi fish symbolize?

The Japanese base their interpretation of the meaning of Koi fish symbols on the characteristics and behavior of the fish itself.

The Japanese consider the koi to be the most energetic of fishes. This is because it is constantly moving, often churning up water. There is an ancient Japanese legend that has the koi swimming upstream against a strong river current and finally arriving at a waterfall. Undeterred, the koi continues to climb the waterfall until it reaches the top where it transforms into a dragon.

From this and other such mythical stories comes the symbolism of the koi fish.

Swimming upstream against the strong current shows great determination, will power, perseverance and tenacity. It also indicates courage, a willingness to stand in the face of adversity, relentlessness and daring to be different. Climbing to the top of the waterfall shows ambition, aspiration, vision, strength, doggedness, patience, an attitude of never giving up and finally, victory.

Finally transforming into a dragon (which is a much revered creature in Japanese and Chinese culture) symbolizes success, good fortune, prosperity and advancement.

According to tattoo websites, a koi represents good fortune, prosperity and riches. Also in Japanese culture, it symbolizes male strength and individualism. The koi represents a radical energy that does not conform to society’s norms and is not easily influenced by others.

“Without the help of Bill, I can safely say that my firm wouldn’t be where it is today. I’m thrilled that my phones are starting to ring with possible new cases and my rankings are up across Google. One area Bill helped with immensely was with my Google Ads account. It’s so easy to spend money on Google Ads and not get the return you hope for, but Bill has helped me create Ad campaigns that are generating good traffic to my website without blowing a hole in my budget. I look forward to working with Bill and continuing to grow my firm. I can’t recommend him and his services enough.”

“Bill of LuckyFish Media has been a wonderful partner to our firm. He is always available to communicate and gives great advice on web-related topics. I would recommend him to any law firm or business.”

I have had the pleasure of working with Bill for several years. During that time, we initiated several different projects and Bill was always able to deliver what we wanted. Best of all, his design and SEO work drove an enormous increase in website traffic and new client leads.

“From our first conversation, it was clear that Bill was the right website/SEO expert for our legal website needs. He combines superior knowledge of technological website terminology; a clear understanding of the importance of well-written content, especially for a law firm, and SEO expertise to draw future clients to our website.
Brendon Basiga,
Basiga Law